To share your memory on the wall of Richard Alfred, sign in using one of the following options:

To send flowers to the family or plant a tree in memory of Richard Alfred, please visit our Heartfelt Sympathies Store.

Receive notifications about information and event scheduling for Richard

We encourage you to share your most beloved memories of Richard here, so that the family and other loved ones can always see it. You can upload cherished photographs, or share your favorite stories, and can even comment on those shared by others.

Posted Apr 08, 2021 at 05:53am
Growing up with cousins in Scottsbluff leave many memories......they lived right next door when we were very young & then we enjoyed visiting them in the country almost every Saturday morning with our dad & every Christmas Eve. ... our dad's were brothers & worked together also. I always think of Richard (& Pat) when we go down Avenue E in Scottsbluff & pass the church where they were married..I remember Richard's toothless smile on that day.....we cannot be with my other cousins as they honor him today at the service but you are all in my heart. .......til we meet again.......God Bless.........June (Alfred) White
Comment Share
Share via:
JW

Posted Apr 08, 2021 at 01:16am
Sincere condolences to Richard's family. Richard is my cousin but I hadn't seen or talked to him for a very long time. He made contact with me and we renewed our relationship which I appreciate very much. He was very kind to his wife in her last years which impressed me very much. Peace to Richard and to all the family.
Gary Gotschall
Comment Share
Share via: 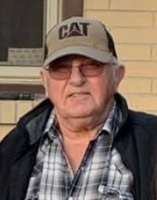