To share your memory on the wall of William Howe, sign in using one of the following options:

To send flowers to the family or plant a tree in memory of William Eugene Howe Sr., please visit our Heartfelt Sympathies Store.

Posted Nov 22, 2020 at 05:42pm
May God Bless all of you at this time. We are thinking of you all. We'll all miss Bill. The day after Bill's passing my devotional reading fit Bill's life. The reading was from John 11:17-27/Psalm 16- The emphasis being on this, Everyone who lives and believes in Me shall never die. John 11:26 The title "I Will See You Again". This verse brought me great comfort that day and through the week. As, well as, Psalm 16 vs. 1 Keep me safe, O God, for in you I take refuge.
Bill and his family have been a blessing to all who knew him and his family.
Love you all,
Ed and Christine(Lowry)Fourman
Comment Share
Share via:
JB

Posted Nov 20, 2020 at 01:34pm
I and my brothers attended Sunflower School. We are Janice, Johnnie and Mike Carlson. We have very vivid memories of Bill and your whole family. We attended school with all of you Howe children. Bill was always smiling and kind to all of us. He was such a very hard working man and a wonderful christian example to all. This picture of him on this obituary is the way I remember him smiling at all times. God Bless all of you and be at peace knowing that he is at home with his Lord and Savior.
Janice (Carlson) Boender
Comment Share
Share via:
HS

Posted Nov 19, 2020 at 09:08pm
Bill was one of the kindest, gentlest men I've ever known. He truly lived the Christian life. He will be greatly missed.

Peaceful White Lilies Basket was purchased and planted a memorial tree for the family of William Howe. Send Flowers 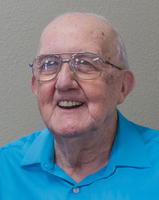