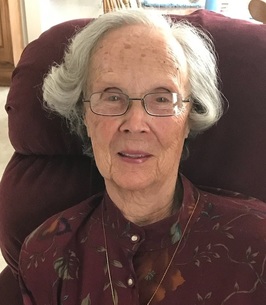 Virginia Bonita Wilson, of Mitchell, died Thursday, July 14, 2022, at Caring Country Cottage in Alvin, Texas. Her graduation to heaven celebration funeral service will be on Thursday, July 28, 2022 at 2p.m. at the Mitchell Berean Church, 50680 Cook Oil Road with Pastor Giles Armstrong officiating. Interment will be at Forest Lawn Cemetery in Morrill. In lieu of flowers a memorial has been established to Mitchell Berean Church. Online condolences may be made by visiting www.jones-mortuary.com. For those who send cards please include a special memory of Virginia and how you knew her. Jones Mortuary in Mitchell is entrusted with arrangements.
Virginia was born July 9, 1931, in Torrington, Wyoming to Lon and Katherine Graham who lived in Fort Laramie, Wyoming.
She attended school in Virginia, grades 1 through 4 and finished grades 5 thru 12 in Fort Laramie, Wyoming where she graduated in 1949 as valedictorian of her class.
Virginia met Harry Wilson from Morrill, Nebraska and they were married on December 31, 1948. Harry worked on his father’s farm and during that time they had two children Katherine (Kathi) and Harry (Bud). Then in 1956, Harry moved his family from the farm and started working for Great Western (GW) Sugar Company in Mitchell, Nebraska. While living in Mitchell, Harry and Virginia headed up a group that started the Berean Fundamental Church.
In the summer of 1966, Harry was transferred to the GW Sugar company in Lovell, Wyoming where they lived for three years. During this time both Kathi and Harry (Bud) graduated from high school in Lovell. Then in 1969 Harry was transferred to Loveland, Colorado with GW Sugar Company. Now with no children at home, Virginia started working as a bank teller in Berthoud, Colorado. After being in Colorado for a few years Harry was then transferred back to the Scottsbluff area with GW, and they moved into her current home in Mitchell on 18th Ave.
Harry and Virginia enjoyed being together with family and would regularly travel to Texas to see their grandchildren and great-grandchildren usually for Thanksgiving or Christmas.
On July 6, 1998, at their home in Mitchell, her husband Harry passed away. Virginia continued to live alone for many years after that, as her son Harry (Bud) was living nearby. Virginia continued working at Pinnacle Bank in Mitchell until she retired in 1989. Her husband Harry served as a faithful elder at Mitchel Berean Church for many years while Virginia served in the area of finances at Mitchell Berean Church.
Harry (Bud) was living with Virginia in her home until April of 2020 when she went to stay with her daughter, Kathi Jackson and her husband, in Sugarland, Texas. Virginia stayed with them for about 18 months until Kathi was no longer able to continue her care. Then in December of 2021 Virginia was moved to a memory care facility in Alvin, Texas where she could get more around the clock care. Virginia resided there until her death on July 14, 2022.
Virginia is survived by her daughter Kathi (David) Jackson; granddaughter Kari (Patrick) Richardson and seven great grandchildren Abigail, Grace, Faith, Boaz, Luke, Titus and Kahli; grandson Blake (Robin) Jackson and four great grandchildren Nash, Neely, Nora and Nixon; son Harry (Bud) Wilson Jr. of Morrill, Nebraska and three great grandchildren Matthew, Kati, and Diana of Denver, Colorado; and her brother Alex and his wife Rosemary of Fairfax, Virginia.