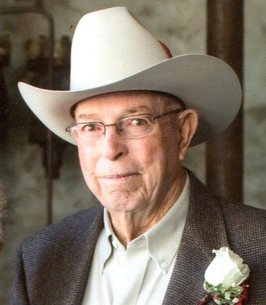 Vaughn L. Blackburn, 91, passed away Tuesday, October 19, 2021, accompanied by his family, at his home in rural Scottsbluff. Cremation has taken place at Bridgman Crematory. A graveside memorial service will be held at 1:00 p.m., Friday, November 12, 2021, at Fairview Cemetery in Scottsbluff with Tam Staman officiating. A lunch will follow the service. In lieu of flowers, memorials may be made to Legacy of the Plains Museum and Nebraska State High School Rodeo Association. Cards may be sent to Clara Blackburn, 240910 Eagle Road, Scottsbluff, Nebraska 69361. Online condolences may be left at www.bridgmanfuneralhome.com.

In 1951, he was drafted into the service and was chosen by the recruiter to be a United States Marine. He served his time following boot camp at a Naval Supply Depot in Ogden, Utah, as a guard. Because of the death of his brother Jerry, he was given an honorable discharge on October 10, 1952, to return home to help his father harvest the crops.

Vaughn was a farmer, owned and operated a livestock trucking business, and brokered cattle for others. He spent some of his younger years rodeoing and provided the time and means for his three children to do the same.

In his retirement he enjoyed traveling, pasture stewardship, golfing, playing gin rummy, and having coffee with his friends.