To share your memory on the wall of Rodney Businga, sign in using one of the following options:

Print
Rodney Allan Businga of Gering passed away November 30, 2020 of covid complications at Regional West Heath Center. A private family celebration of his life will be held at a later time. Online condolences may be made by viewing Rod’s memorial pag... Read More
Rodney Allan Businga of Gering passed away November 30, 2020 of covid complications at Regional West Heath Center. A private family celebration of his life will be held at a later time. Online condolences may be made by viewing Rod’s memorial page at www.bridgmanfuneralhome.com Bridgman Funeral Home is entrusted with arrangements. Memorials would be welcomed in his honor to Legacy of the Plains Museum, Riverside Zoo or Panhandle Humane Society.
Born on November 27, 1952 in Olympia, Washington, to Al and Marianne Businga, Rod grew up in Laramie, Wyoming, where the family could ensure availability of a college education. They catered to the new technology sweeping the country by opening a family business- Accurate TV. Rod worked in the store since he was a little boy starting with sweeping and learning to fix electronics. That part-time job put him through college at the University of Wyoming earning a degree in chemistry and education. He developed a logical, scientific, problem-solving mindset and eventually earned a Master’s Degree in Educational Administration from Chadron State College along with additional coursework throughout his career.
He met his future wife in the science department as he helped her use water, plastic and a trash barrel to create a giant magnifying glass for an elementary lesson. (So, he knew what he was getting into—44 more years of figuring out how to make her crazy ideas actually work!) They married in the summer of 1976 and he became an instant dad to toddler Marc Austin. Andrea Amber made their family complete.
Rod interviewed for teaching positions in several places but after a visit to Scottsbluff he called to say he had found their new home. (He was so impressed that unlike Laramie, Scottsbluff had tulips in April.) That mild climate and great district kept him busy for 34 years teaching chemistry, science, programming and computers at Bluffs Middle School until 2010. After retirement he developed exciting workshops for kids through WNCC’s HATC Discovery Lab. Experimentation and sharing science toys was more fun than work. He loved learning and leading kids to understand complex topics and procedures. His favorite teaching job has been as the afterschool homework poppa challenging grandkids to have fun with math.
Rod served as a summer park ranger at Scottsbluff National Monument and enjoyed many, many summers interacting with tourists from all over the world-another form of teaching. Rod developed a strong work ethic and usually had several jobs at the same time. He didn’t wait for things to happen-he got things started. He remodeled several houses—loving demolition the most. He reveled in working in his shop and when winter came, he could be found going around the block with a snow-covered grin on his face from the snowblower. He liked being nice to neighbors, but he loved running that machine even more.
Rod’s parents encouraged his musical talent with piano and guitar lessons. He sang in a high school group, played in the stage band, performed with the Kenspeckle Players theatre group and as a teenager was proud to become a lifetime member of SPBSQSA. He thought barbershop music was fun and worth preserving—and loved growing old himself singing in the barbershop family. He spent over three decades traveling the country with his comedy quartet, Chordial Celebration, but most of all he loved the rehearsals as they developed their slapstick humor. He seemed to collect musical instruments and swore it was possible to conquer the banjo but we were all glad when he gave up on the violin and trumpet! Playing piano with his granddaughter was a favorite pastime. Just days after he turned 68, music from Turtle Creek Bluegrass Band accompanied Rod as he left this world. He still had lots of music left to arrange and would want “the guys” from barbershop and bluegrass to know how much he enjoyed their company and creativity.
Rod is survived by his wife, Penny; son, Marc Austin Pitts and his daughter Zazou of Oakland, CA; daughter, Amber Newberry (Lionel) and four children: Aidan, Gage, Carson and Kailee of Gering; parents, Al and Marianne Businga of Laramie ; sister, Judy Gerstenberger (Steve) of Denver, CO; brothers-in-law, Marty Leischer (Valerie) of Bridgeport, WV, Greg Leischer (Jackie) of Green River, WY and several nieces and nephews and their children. He is also missed by his daily walking partner, granddog, Echo.
Read Less

To send flowers to the family or plant a tree in memory of Rodney Allan Businga, please visit our Heartfelt Sympathies Store.

Receive notifications about information and event scheduling for Rodney

There are no events scheduled. You can still show your support by sending flowers directly to the family, or planting a memorial tree in memory of Rodney Allan Businga.
Visit the Heartfelt Sympathies Store

We encourage you to share your most beloved memories of Rodney here, so that the family and other loved ones can always see it. You can upload cherished photographs, or share your favorite stories, and can even comment on those shared by others.

Posted Dec 15, 2020 at 10:43am
I'm struggling to know where to begin. We're still in shock. Yesterday started like most other days but we had a Christmas card in the mail from Penny and I anxiously opened it to see what last year brought to the Businga's. When I read that they had lost Rod I was stunned.

Rod was my next door neighbor when we both lived in the Wildcat Hills. He was my "go to" guy when it came to electrical and electronics questions. He helped me out more times than I can remember. A couple of times we'd see one another working outside on an especially hot day and we'd bring the other guy a cold beer to enjoy together. We took turns watching each other's pets when we took trips and each kept keys to other's house. He was always quick with a smile and an infectious laugh.

Jennie and I miss you very much, Rod, and even though were hundreds of miles away from Gering now, the pain is intense. But even though you left us way too soon, we know you are in a better place and performing music.

God bless you and God give comfort to Penny and the kids and grandkids. The world is a little better having had you here.

Posted Dec 11, 2020 at 01:48pm
The old neighborhood was so fun. The Businga family, the Birds and the Ruckmans had many years together. Oh the memories. I hadn't connected with Rod and Judy for years until one of our neighborhood mothers passed to her Lord. We had such a good visit. Rod was so talented in so many ways. He had to put up with all of us girls. Al, Maryanne and Judy, I am so saddened to hear about Rods passing. You all are in my prayers. God Bless all of you. Marilyn Scarpelli
Comment Share
Share via:
GW

Posted Dec 10, 2020 at 04:10pm
A lot of the personal qualities I needed later in life came from working alongside Rod as I helped him pick up and deliver televisions after school. Farewell my friend, and I will play a fiddle tune for you when we meet up again. Gary White
Comment Share
Share via:
TG

Posted Dec 10, 2020 at 12:08pm
Rod gave me my first summer job...he and I delivered TVs around Laramie using his brand-new driver's license. He was very serious about being a good driver and a good representative of his family's business. My most vivid memory, however, occurred during rehearsals for one of our Kenspeckle Players plays. One of our castmates fell through a (painted-out) glass window strangely placed beside the pin rail in the stage house of the theater. It may or may not be as serious as I remember, but there was blood all over and before I had a chance to even think of how to act, Rod had a handkerchief out (what 20-year-old carried a handkerchief in those days?) and was applying pressure to the arm-wound. If he didn't save a life, he certainly could have. It was great to see Rod during our monthly Laramie High Zoom meetings, and I will always regret I didn't engage him more...I was going to tell him what a good person I knew him to be ..."next time." The people reading this already know.
Tom Greene
Comment Share
Share via:
GS

Posted Dec 09, 2020 at 06:32pm
Dear Penny and family,
We are so sorry to hear of Rod's passing. You are in our thoughts and prayers are with you. Gene, as a teacher and friend, has many good memories of working with Ron at the Scottsbluff Jr. High (BMS) . May your family have many wonderful memories to carry you through this difficult time. May he rest in peace. Gene and Mari Schwarzkopf
Comment Share
Share via: 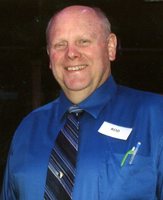 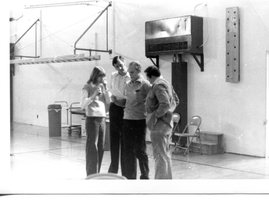 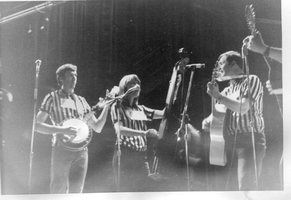