To share your memory on the wall of Mildred Gerber, sign in using one of the following options:

Millie was born April 1st, 1928 in Polson, Montana to Harry Houston Bonser and Cecelia Theresa (nee Ducharme) Bonser. She was the youngest of seven daughters. She was an enrolled tribal member of the Confederated Salish and Kootenai tribes in Montana. In 1947 she graduated from Ogallala Community School in Pine Ridge, South Dakota. Later she attended Chadron Prep school in 1948 and received a Teaching Certificate.

Millie married the love of her life, Charles Frederick “Fred” Gerber, on May 28, 1950. To this union two girls were born, Elsie and Paula. She taught at numerous schools on the Pine Ridge reservation while her husband Fred owned and operated a Mobile Gas station until he passed away in July of 1968.

After her husband’s passing Mildred and her girls moved to Spearfish, South Dakota where she attended Black Hills State College, received her Bachelor of Science degree in Education, and single-handedly raised her daughters.

An intelligent and educated woman, Millie was also a “world traveler”, having been to Europe, on multiple cruises, and across the entire United States from San Francisco, California, to Orlando, Florida. She did some amazing things in her lifetime, from being a USO girl during WWII, working for Southern Pacific RR in California, to teaching (including Olympian Billy Mills in elementary school!), and many other varied accomplishments, including speaking Lakota.

She is survived by her daughters Elsie Converse and Paula Gerber, granddaughter Dael Hendren (James Nielsen), and great grandchildren Elsianne and Conlan Nielsen, all of Scottsbluff, Nebraska.

A private celebration of Millie’s life will be held at a later date at St. Francis Episcopal Church in Scottsbluff, NE. The family suggests that anyone wishing to honor Millie’s life should donate to www.re-member.org, which is a nonprofit assisting those in need on the Pine Ridge Reservation, or to any charity. Online condolences may be made by visiting Millie’s memorial page at www.bridgmanfuneralhome.com.
Read Less

To send flowers to the family or plant a tree in memory of Mildred Mattie Gerber (Bonser), please visit our Heartfelt Sympathies Store.

Receive notifications about information and event scheduling for Mildred

There are no events scheduled. You can still show your support by sending flowers directly to the family, or planting a memorial tree in memory of Mildred Mattie Gerber (Bonser).
Visit the Heartfelt Sympathies Store

We encourage you to share your most beloved memories of Mildred here, so that the family and other loved ones can always see it. You can upload cherished photographs, or share your favorite stories, and can even comment on those shared by others.

Posted Nov 25, 2020 at 01:50pm
Elsie and Paula, I offer my sincerest condolences to you and your families. No matter how old they are, losing your mom is difficult. She was an amazing woman and I have so many memories of your family from Pine Ridge. Elsie I still think of you as my best friend from those days. I remember Paula and my brother Pete playing together often. Let the love and memories live on in your heart and she will always be with you.
Comment Share
Share via:
CS

Posted Nov 22, 2020 at 09:09pm
Elsie and Paula,
My brother Terry alerted me to Millie’s passing. I understood she lived in Rapid for a while and always meant to visit her, but....
I remember mom working at the hotel, in fact I have a coffee cup from the hotel 😀 The first TV show I ever saw was a soap at your house, which was behind the hotel if I remember correctly. I remember helping her move, at least her furniture, to Buffalo Gap? Anyway, as I read your mom’s obit, I realized how much I didn’t know of her background. As such, I am curious about her early years in Pine Ridge and have a couple questions if one of you is willing? My email is chuckdswick@gmail.com

Posted Nov 22, 2020 at 02:33pm
Paula and Elsie,
I was so sad to read of your mother's passing. I was just talking to someone about her (and the two of you), just the other day. I remember the days when my mom (Ethel Swick), used to take me and my sister (Sissy), with her to your house and the four of us would all play together! I also mentioned how our family used to collect the Betty Crocker coupons off of various cereal and other boxes, and my mom would save them and give them to your mom! Funny how certain things stick in ones mind for years and years. I last saw your mom at the German beer tent in Rapid City several years ago. She was taking tickets and recognized me immediately! It was so amazing to see her again after so many years. Please accept heartfelt condolences on your loss on behalf of myself, my sister, and my brother Chuck (Swick). God bless and take care.

Posted Nov 21, 2020 at 10:52pm
Paula, I was so sorry to hear of your mom's passing. I will always remember your mom, Kerry's mom and my mom sitting together in the stands watching basketball. The three red-heads! Please know I'm thinking of you and sending prayers your way. May the love of God bring you peace and the love of family and friends bring you comfort. I would love to hear from you again. I still feel like you are a close friend even after all these years. Love, Beth
Comment Share
Share via:

Posted Nov 21, 2020 at 05:05pm
Our sympathy to Millies family. She was our neighbor across the street on Lockwood Drive in the early 80’s. Millie was so sweet and loving and her smile was unforgettable. May she enjoy the eternal glories of Heaven. Sincerely, Bev and Joe Hecker
Comment Share
Share via: 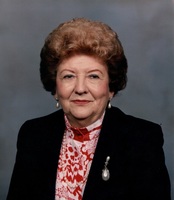