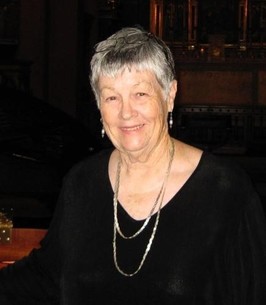 Mary Kalen Romjue, Ph.D., 82 years young, passed away on July 4, 2022, at Vitas Hospice in Rockledge, FL. Her Celebration of Life service will be held at 10am on Saturday, August 6, 2022, at Bridgman Funeral Home in Scottsbluff with Pastor Rick Reisig officiating. Inurnment will follow at Sunset Memorial Park Cemetery in Scottsbluff. In lieu of flowers, donations can be made to the Space Coast Science Education Alliance (SCSEA), a non-profit 501c3, which supports science literacy. Checks can be sent to FSEC Energy Research Center (aka Florida Solar Energy Center), 1679 Clearlake Road, Cocoa, FL, 32922. Online condolences may be made by viewing Mary’s memorial page at www.bridgmanfuneralhome.com.
Mary was born and raised in Scottsbluff, Nebraska. She is survived by her brother Kermit Wright, his wife Shirley, nephew Aaron Wright and wife Kristina, nephew Bryan Wright and wife Debbie, niece Cateena Hill and husband Dennis, as well as grandnieces and grandnephews, (Kale, Korinne, Emily, Hunter, Blake, and Kennedy). Mary was married to Robert Romjue for 26 years. They divorced in 1991 but remained friends until his death in 2019.
Mary graduated with a Bachelor of Arts degree in Biology from William Jewell College in Liberty, MO, in 1962. Despite saying she never wanted to be a teacher, Mary went on to positively impact the lives of Nebraska students and their families for 25 years by teaching middle school and high school science and general and advanced biology. In 1991, she attended the University of Nebraska in Lincoln where she received her Doctorate in Science Education. Throughout those years and beyond, Mary was also very involved with organizing science fairs and was an active member of the International Science & Engineering Fair (ISEF) Advisory Council from 1974-2002. She was selected for the ISEF Initial Scientific Review Committee (SRC) that wrote the rules for vertebrate animals, human subjects, recombinant DNA, pathogens, etc., and checked research projects coming to ISEF for compliance.
Mary moved to Rockledge, FL in 1993 to teach Elementary Science Methods & Space Science for Educators, at the University of Central Florida (UCF). She had a busy schedule educating undergraduate and graduate level students at several of the UCF satellite campuses in Daytona Beach, Palm Bay, Cocoa and Kissimmee, which she continued until her retirement in 2010. It was not unusual for Mary to be recognized wherever she went, by appreciative students who now had burgeoning teaching careers. Mary was a founding member of the Space Coast Science Education Alliance (1994-present) and was a Vice Chair and Board member of Space Florida (formerly Florida Space Authority) from 1994-2001.
Mary was a people person, always reaching out to make new friends. Her inquisitive nature and desire to be of help kept her busy cleaning fossils, taking nature trike-rides, making fossil dig kits, judging STEM competitions, and visiting with friends and family. Although she will not get to take her trip to Egypt scheduled for this December, over the years she traveled to Alaska, Europe, Africa, China, Tibet and South America.
Mary had a sparkle in her eyes and a notorious snort laugh that got others chuckling. She was a master at asking probing questions that sparked self-reflection and animated discussions. Mary was much loved and will be missed.