To share your memory on the wall of Joyce Kraft, sign in using one of the following options:

Arthur was born May 16, 1924, to Henry and Katherine (Sterkel) Kraft Kimmel. He was raised and educated in Scottsbluff. As a young man, he followed his brothers to California and eventually began working in the shipyards before enlisting in the Navy, serving from 1943 to 1945. He served aboard the CL-49, a light cruiser otherwise known as the “Lucky Lou” and officially as the St. Louis. Arthur was involved in six out of eleven major conflicts during the Pacific campaign. He survived several bombings, torpedo attacks and kamikaze dive bombers while on board the Lucky Lou and was close enough to witness the mushroom cloud after the bombing of Hiroshima. He was very proud to have served his country and was able to attend a reunion in Farragut, Idaho honoring his fellow shipmates that served on the St. Louis alongside him.

Following his service, he met and married his loving wife Joyce Herrick on March 29, 1948. To this union, two children were born. Arthur made his living as a carpenter and worked on many of the banks and commercial buildings in the area. He eventually built his own home which he was very proud of. He enjoyed his yardwork, gardening, cooking, traveling, hunting, fishing, and excelled in all of them.

Joyce was born July 10, 1927, to Gerold and Faye (Adams) Herrick in Monowi, Nebraska, the smallest town in the state. Growing up in the sandhills the family eventually moved to Stuart, Nebraska, where she was raised and educated. She was her Daddy’s “right hand man” and could often be found driving a tractor or caring for the livestock.

After graduation from high school, she followed her sisters to Omaha to pursue a career in nursing. After her studies she eventually moved to Scottsbluff and began working at the Methodist Hospital. She wore many hats as a registered nurse before becoming the nurse supervisor for the pediatric department. Pediatrics was her passion as she loved all the little children. She retired, after working for many years, from West Nebraska General Hospital, currently known as Regional West Medical Center.

Joyce met and married Arthur H. Kraft on March 29, 1948. To this union two children were born. She was a loving, caring, and compassionate woman, and kept a clean and happy home. She was very hardworking, supportive of her husband, and raised her children to be self-sufficient and independent. She enjoyed traveling, cooking, sewing, gardening and canning.

She was preceded in death by her parents, Gerold and Faye Herrick; her husband, Arthur Kraft; and sisters and brothers-in-law; Norma (Doug) Melcher, Geroldine (Bud) Alexander, and Lois (Ed) Schlindwein.

Most loving parents you could ever ask for!
Read Less

To send flowers to the family or plant a tree in memory of Joyce I. Kraft (Herrick), please visit our Heartfelt Sympathies Store.

Receive notifications about information and event scheduling for Joyce

We encourage you to share your most beloved memories of Joyce here, so that the family and other loved ones can always see it. You can upload cherished photographs, or share your favorite stories, and can even comment on those shared by others.

Scheels sent flowers to the family of Joyce I. Kraft (Herrick).
Show you care by sending flowers

Posted May 26, 2021 at 07:56am
Thinking of you all during this difficult time. Your Scheels Family 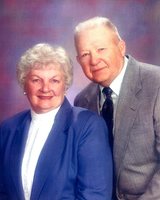