To share your memory on the wall of Jean Hilderman, sign in using one of the following options:

Print
Jean Ann Hilderman, 87, passed away peacefully on February 27, 2021 at The Residency Care Center with family by her side after a long, courageous battle with cancer and heart issues.

Due to the COVID-19 pandemic, a private family-only m... Read More
Jean Ann Hilderman, 87, passed away peacefully on February 27, 2021 at The Residency Care Center with family by her side after a long, courageous battle with cancer and heart issues.

Jean was born near the North Dakota/Montana state line in McKenzie County, North Dakota on April 27, 1933 to Ethel (Cook) and Elzie (Mike) Ward. After graduating high school in Fairview, Montana in 1951, she worked as a legal secretary in Sidney and Billings, Montana. While working in Billings, Jean went to Washington, DC and helped with lobbying work for the National Beef Council and the National Cattlemen’s Association. From there she assisted in setting up the two organizations’ national offices in Kansas City, Missouri. After moving back to Billings, she married Ray Hilderman on July 27, 1957. She and Ray moved to Denver later that year while Ray completed his accounting degree at Denver University. During their time in Denver, Jean worked for the manager of the Geophysical department of Carter Oil. She and Ray moved to Scottsbluff in Dec. 1958 where Jean was a legal secretary for the law firm of Wright and Simmons until the birth of their daughter Teresa Jean in 1962. Later, Jean worked during tax seasons for over 20 years with Ray at his CPA firm.

Volunteering was an important part of Jean’s life, and she shared her time and innumerable talents with a number of organizations in Scottsbluff. After she and Ray joined Plymouth Congregational Church in 1959, she held many offices there over the next 50-plus years, in addition to teaching Sunday school and being active in Pilgrim Society. She served as Bethel Secretary for Job’s Daughters, was a Girl Scout leader, and served a term as President of the Volunteers and Friends of Regional West during her decades of volunteering at the hospital, including years as a volunteer at the Breast Health Center. She volunteered as a shopper for seniors at Panhandle Coop, was a member of PEO Chapter FC and The Questers Club, and co-chaired the first Penny Carnival at Westmoor Elementary School in Scottsbluff. In later years, Jean served on numerous committees at the Residency in Scottsbluff.

Family was everything to Jean, and she cherished being a wife, mother, grandma, and great-grandma. As they grew, she loved cheering on grandson Drew in soccer and tennis, and attending granddaughter Carolyn’s piano recitals, dance recitals and competitions, and drill team events. She took great pride in creating a cozy, welcoming home – the kind of place where friends and family loved spending time. Jean enjoyed gardening, traveling, bridge clubs, reading, baking, and cooking. She was an expert on all things tea, and her family’s annual Christmas tea, complete with reading “A Cup of Christmas Tea,” was a treasured tradition for decades that continues today. In her later years, she and Teresa enjoyed traveling together to Las Vegas; Savannah; Breckenridge; Victoria, Canada; and a special trip back to her hometown of Fairview, Montana.

Jean’s family would like to extend a very special thank you to Rebecca Guerrero with Regional West Hospice, Father Mark Selvey at St. Francis Episcopal Church, and the staff at the Residency Care Center for their loving care and support given to Jean during the final months of her life. They are truly all angels here on earth.
Read Less

To send flowers to the family or plant a tree in memory of Jean Ann Hilderman (Ward), please visit our Heartfelt Sympathies Store.

Receive notifications about information and event scheduling for Jean

We encourage you to share your most beloved memories of Jean here, so that the family and other loved ones can always see it. You can upload cherished photographs, or share your favorite stories, and can even comment on those shared by others.

The Cooperative Finance Association sent flowers to the family of Jean Ann Hilderman (Ward).
Show you care by sending flowers

Posted Mar 13, 2021 at 11:54am
Teresa and family, I just wanted to tell you something you already know. Jean was a lovely, elegant lady so kind and dear. She brought light into the world. God bless you all!

Posted Mar 04, 2021 at 08:48pm
Teresa,
Your mom and dad raised a kind and welcoming friend to a disabled stranger in a new land. So sorry for your loss. Keeping all of you in my prayers. God be with each one of you as you travel home.
Michelle Forney
Comment Share
Share via:
TA

Posted Mar 04, 2021 at 07:14am
I have so many fond memories of Jean, from years of babysitting for her daughter Teresa. She was such a gracious soul.
Janet Busekist Jenisch
Comment Share
Share via:

Posted Mar 03, 2021 at 12:18pm
Teresa, my deepest sympathy to you and your family. Your mother was such a lovely lady and so friendly. I am remembering fondly the time I first met your family. It was when we met in Miami many years ago for the Orange Bowl game. Both of our families had such a wonderful time together. My thoughts and prayers are with you. 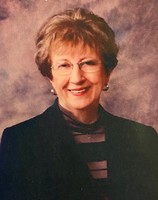