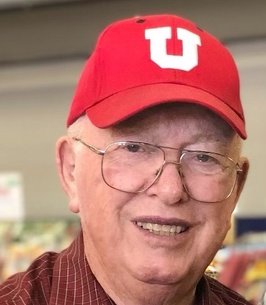 Gerald Allen Wilcox, beloved husband, father, brother, grandfather, and great-grandfather, passed away in his home on Thursday, December 9, 2021, at the age of 87. His funeral service will be held at 1pm on Saturday, December 18, 2021, in Scottsbluff at the Church of Jesus Christ of Latter-Day Saints with Bishop Adam Harper officiating. Interment will follow at Oregon Trail Memorial Cemetery in Bridgeport. It is respectfully requested that in lieu of any flowers, memorials in Gerald’s honor be made in care of his family to be designated at a later time. Online condolences may be made by viewing Gerald’s memorial page at www.bridgmanfuneralhome.com. Bridgman Funeral Home in Scottsbluff is entrusted with arrangements.
Gerald was born in Bridgeport, Nebraska on September 6, 1934, one of five children to Rex Wilcox and Cecelia Brachtenbach Wilcox. He graduated from Bridgeport High School, and soon after went to Southern California to serve a mission for The Church of Jesus Christ of Latter-day Saints. After finishing his mission, he attended Ricks College where he received his Associates Degree, and then Brigham Young University where he received his Bachelor of Science Degree and Master’s Degree in Education.
After returning to Nebraska, he met his beautiful bride Jeanette Osgood in Bayard, NE. They were sealed in the Salt Lake City Temple on March 24, 1967, and soon a family of eight children followed.
Gerald was a beloved teacher who taught throughout the Panhandle of Nebraska. He taught a variety of courses, while also coaching basketball and football. He derived great joy in the love he shared with all his students and players.
After his teaching career, Gerald was involved in numerous businesses, and loved all things patriotic. He was able to share his love for patriotism when he opened Discount Fireworks and saw the joy of customers celebrating our country’s independence for over 40 years. Throughout the years, Gerald’s pride in his country was evident as he continually looked for another piece of trash to pick up, a weed to be pulled, rocks to be moved, or other things that served the community.
He is survived by his wife Jeanette, his children Becky Henkel, David (Rachel) Wilcox, Eric Wilcox, Jason Wilcox, Jenny (Aaron) Pierre, and Katie Wilcox; his 12 grandchildren: Tyler Wilcox, Sarah Boydston, Blake Wilcox, Ryan Wilcox, Anessa Pierre, Tanner Henkel, Holly Wilcox, Emma Henkel, Khamil Pierre, Macey Wilcox, Ali Wilcox, and Ava Ryan; Great-grandchild: Tucker Wilcox; Brother: Rex (Patricia) Wilcox; Sister: Diane (K. Newell) Dayley; and many nieces and nephew and great nieces and nephews whom he loved.
He was preceded in death by his parents Rex and Cecelia Wilcox; Sister Joan Western; Brother-in-law Jerry Western; and children Adam and Ryan Wilcox.