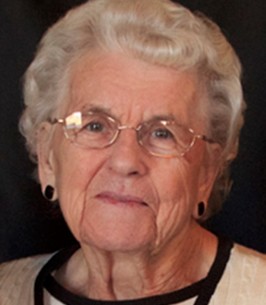 Elsie Adelia Hauff, 88, of rural Morrill, passed away Wednesday, August 3, 2022, at the Torrington Community Hospital. Her funeral service will be held at 10am on Tuesday, August 9, 2022, at Sovereign Grace Reformed Church in Morrill with Pastor Todd Seay officiating. Interment will follow at Forest Lawn Cemetery in Morrill. Visitation will be from 9am – 10am at the church. It is respectfully requested that in lieu of flowers, memorials in Elsie’s honor may be made to her family to be designated at a later date. Online condolences may be made by viewing Elsie’s memorial page at www.jones-mortuary.com. Jones Mortuary in Mitchell is entrusted with arrangements.
Elsie Hrasky married Alexander Hauff on Mar. 6, 1964. In her early years, she worked at Goodwill Market in Mitchell. Elsie was a stay-at-home mom until the late eighties early nineties when she went to work for Brown’s Sheep Company in Mitchell, NE. She worked for many years there. After leaving Brown’s Sheep Company, she went to work at the Mitchell Care Center until her retirement at age 82.
Elsie enjoyed crocheting, knitting, baking, gardening, and finding new iris flowers to put in her iris bed. She was an avid salt and pepper shaker collector with over two thousand pairs! No holiday was complete unless she received at least one pair of salt and pepper shakers! Elsie was quick witted and always had an answer for everything. Her “dad jokes” were impeccable. One of her granddaughter’s favorite “dad joke” was “How do you catch a unique rabbit? You neak up on it. How do you catch a tame rabbit? Tame way, you neak up on it.” Elsie was a member of the Ya’ll Come Retreads motorcycle club. She was also a member of the Berean Church in Morrill (currently the Sovereign Grace Reformed Church).
She is survived by her daughter Sherri (Hauff) Schultz and son-in-law Richard Schultz of Torrington, WY; granddaughter Bethany (Schultz) Mumm and great granddaughters Madison Mumm and Elliott Mumm of Gering, NE; granddaughter Christina (Schultz) Boehr and husband Ken Boehr and great grandchildren Alexia, Baylee, Caitlin, Danielle, Edward, and Faith Boehr of Morrill; sister Margaret Harriger of Scottbluff, NE; brother Virgil Hrasky and his wife Beverly; two nephews, one niece, two great nieces, and three great nephews.
Elise was preceded in death by her parents Frank and Viola (Bennett) Hrasky; her brother Leroy Hrasky; and her husband Alexander Hauff.
Elise was an amazingly strong, loving, and caring mother, grandmother, sister, and friend who will be greatly missed!!!