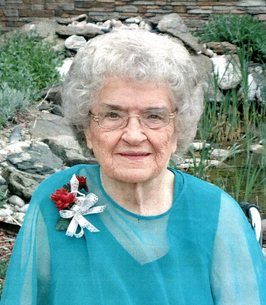 Eldora Lorraine (Betz) Andreas, 97, formerly of Bayard, was called to her eternal home on July 24, 2022. Her funeral service will be held at 10am on Thursday, July 28, 2022, at Faith United Church of Christ in Bayard with Pastor Tom Smith officiating. Services will be live streamed on Bridgman Funeral Home Facebook Page. Interment will follow at Bayard Cemetery. Visitation will be from 9-10am at the church on Thursday. It is respectfully requested that in lieu of any flowers, memorials be made to Faith United Church of Christ. Online condolences may be made by viewing Eldora’s memorial page at www.bridgmanfuneralhome.com. Bridgman Family Funeral Home in Scottsbluff is entrusted with arrangements.
Eldora was born February 21, 1925, to Fredrick and Anna (Diener) Betz in Bayard, Nebraska. She grew up in Bayard and graduated from Bayard High School in 1943. Eldora moved to Denver, Colorado for a few months after graduation and eventually returned to Bayard. After her return, she worked at Montgomery Ward in Scottsbluff, Nebraska for a short time.
Eldora married Herman Andreas, on November 12, 1944. The couple lived in the Bayard area where they worked hand in hand farming and feeding cattle their entire life. Herman and Eldora were blessed with a son, Kent Herman.
Eldora loved her family and spending time with them. Eldora loved baking, cooking and entertaining friends and family and she was a very talented embroiderer. Eldora was a lifelong member of the Faith United Church of Christ in Bayard.
Eldora is survived by her son, Kent and Karen (Meier) Andreas, grandchildren Krissa (Patrick) Knopik of Lincoln, NE, Kodie (Quincy) Wiens of Lincoln, NE and Klint (Ashley) Andreas of Springfield, MO, great grandchildren Chloe and Livia Wiens, Elliot, Lennon, Jude and Walsh Andreas.
Eldora was proceeded in death by her husband, Herman, parents Fredrick and Anna Betz, brother Elwood Betz, infant brother Leonard and infant sister Loretta.