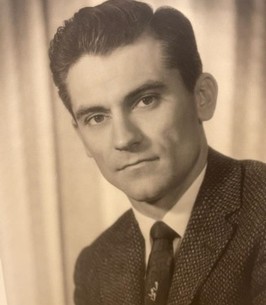 Dr. Ernest W. Beehler, Jr., 96, of Omaha, formerly of Scottsbluff, passed away peacefully on Tuesday, June 21, 2022, in Omaha after a short illness. His funeral service will be held at 11am on Thursday, June 30, 2022, at the Seventh Day Adventist Church in Scottsbluff with Pastor Mickey Nickless officiating. Private family interment will follow at Mitchell City Cemetery. Visitation will be Wednesday, June 29, at Bridgman Funeral Home in Scottsbluff from 5-7pm. It is respectfully requested that in lieu of flowers, memorials in Ernest’s honor be made to the Seventh Day Adventist Church for the Ernie and Helyne Beehler Memorial that will go towards Valley View School. Online condolences may be made by viewing Ernie’s memorial page at www.bridgmanfuneralhome.com. Bridgman Funeral Home in Scottsbluff is entrusted with arrangements.
Ernest W. Beehler Jr. was born in South Bend, Indiana on December 3, 1925, to Ruth and Ernest Beehler Sr. He finished high school in South Bend and then attended Andrews University in Michigan. He married Helyne Nelson in 1948 and they had 4 children over the next 12 years. Ernest graduated from medical school at Loma Linda University in 1952 and after internship began a neurosurgery residency in Los Angeles.
His training was interrupted by the Korean War, and he served in the Navy as a flight surgeon for the Marine Corp for 2.5 years. In 1960, he completed his neurosurgery residency and started a successful medical practice in suburbs of Los Angeles. In 1975 he was recruited by his brother-in-law, Dr. John Ruffing, to relocate to Scottsbluff as the first neurosurgeon in the Panhandle. He continued to practice at Regional West Medical Center for 20 years until his retirement. During his retirement years he enjoyed reading, Bible study, traveling, gardening, painting, and learning to cook.
He was preceded in death by his parents, Ruth and Ernest, and his beloved wife, Helyne Beehler.
He is survived his sisters, Pat Ruffing (John) and Shara Adams; his children, Connie, Ernest (aka Bud) III, Robert (Myrna), and Donna (Bob) Houston; grandson Matthew (Audrey) Beehler, and 2 great grandchildren, Wyatt and Thea, as well as 6 nieces and 4 nephews.