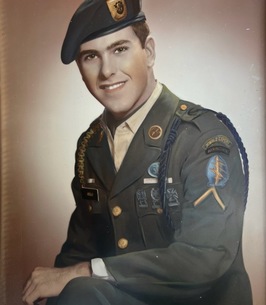 Donald Louis Iasillo, 75, died unexpectedly on April 1, 2022. Per his wishes, cremation has taken place. His memorial service will be held Tuesday, April 5 at the First United Methodist Church in Scottsbluff, NE, at 7:00 pm MDT. In lieu of flowers, memorial gifts will be used for expenses and a college fund for his daughter Dawson. Online condolences may be made by viewing Donny’s memorial page at www.bridgmanfuneralhome.com. Bridgman Family Funeral Home and Cremation Service in Scottsbluff is entrusted with arrangements.
Donny was born January 5, 1947, to Daniel and Lena Iasillo in Newark, New Jersey. Donny went to high school in Newark and Union, New Jersey where he excelled in basketball, baseball, and football. Later he went on to play minor league baseball in Cedar Rapids, Iowa. He later attended college at UCLA. Donny enlisted in the army from 1966-1972. He served in Vietnam in Special Forces and was Airborne. After stepping on a butterfly mine at war, he received a Purple Heart and received seven Gold Stars while in war.
While living in California, he had his first daughter, Amber Monique. Several years later after moving back to New Jersey, he had his second born, Ciara Jade, and his only son, Daniel John. In 1992, he met his soulmate, Missi Freouf. In 1995 they sealed their love for one another in marriage on November 25. In 2005, he had his final child, Dawson Jo. Nothing was more important to Donny than his family, especially his children.
Donny was known for being selfless. He gave everything to his family and would go to the ends of the earth for them. He told terrible jokes often. Donny lived so many lives in the one he was given.
He is survived by his wife Melissa (Missi), his children Amber Cohen, Ciara Iasillo, Daniel Iasillo, and Dawson Iasillo; his grandkids, Taliah, Cash, and Jordyn; his sister and brother-in-law Ellen and Wayne Rice; his in-laws, Dean and Judi Freouf, Scotty Freouf, and Kim Freouf (Ray Guteta); and many nieces and nephews.