To share your memory on the wall of Christine Webb, sign in using one of the following options:

Services will be livestreamed on St. Francis Episcopal Church Facebook page and website, www.saintf.org. Tributes of sympathy may be made by visiting Chris’ memorial page at www.bridgmanfuneralhome.com. Bridgman Funeral Home in Scottsbluff is entrusted with arrangements.

Chris was born September 17th, 1951 in Scottsbluff, NE, the second child of Carl & Norma Carlson. She grew up on the family farm attending Sunflower rural school, graduating with the class of 1969. After graduation she attended one year at Chadron State College before marrying her high school sweetheart Jack Webb on August 14th, 1970 at St. Andrews Episcopal Church (Now St. Francis) in Scottsbluff, NE.

They made their first home in Winside, Nebraska where Jack took his first teaching job. Another move took them to Newman Grove, Nebraska. While in Newman Grove Chris took on the big job of the school lunch manager for Newman Grove public school, and also became the youngest school lunch manager in the whole state of Nebraska at that time. This was always one of her proudest achievements. Jack and Chris spent 3 years in Newman Grove, before then moving to Harrisburg, Nebraska in 1974. It was in Harrisburg that Jack and Chris embarked upon their most important journey, and welcomed their daughters to their family, first Sheila in 1975 and then Erin in 1977. The family then made a move to Glenrock, Wyoming in 1978 where they made their home, staying in Wyoming for 31 years. While in Glenrock Chris worked first as a legal secretary and then as the Glenrock Community Education Coordinator through Eastern Wyoming College.

Retirement brought Jack and Chris back to Scottsbluff where they resided until her death. Chris retired from her career early to focus on her grandkids. She so enjoyed babysitting her grandkids and going to their many activities. She was a very avid bridge player, playing in multiple bridge clubs, and sometimes having 4 or 5 games scheduled in a week. Chris was a kind and giving friend to all who knew her. She enjoyed serving on the Scottsbluff Library Foundation Board for many years. She also very much enjoyed reading and gardening.

She is survived by her husband Jack, daughter Sheila Webb of Scottsbluff, daughter and son-in-law Craig and Erin Rumsey of Laramie, Wyoming. Grandchildren Jacqueline, Margo and Mia Bowles of Scottsbluff, and Carly, Lane, and J.D. Rumsey of Laramie, Wyoming. Brother and sister-in-law Clay and Deb Carlson of Scottsbluff, their children Wade Carlson and Tonya (Phil) Luebbert. Sister and brother-in-law Mike and Jeannine Foster of Crete, Nebraska and their children Hilary (Derek) George and Carl Foster. She was preceded in death by her Father and Mother.
Read Less

To send flowers to the family or plant a tree in memory of Christine Elizabeth Webb (Carlson), please visit our Heartfelt Sympathies Store.

Receive notifications about information and event scheduling for Christine

We encourage you to share your most beloved memories of Christine here, so that the family and other loved ones can always see it. You can upload cherished photographs, or share your favorite stories, and can even comment on those shared by others.

The Morwood and Ellis Families, Doane Women's Golf Team, and other have sent flowers to the family of Christine Elizabeth Webb (Carlson).
Show you care by sending flowers

Posted Feb 12, 2021 at 05:12pm
I was really hoping to come to the service,but couldn't get there on this very cold day. Chris and I were great friends from our school days at Sunflower. I looked forward to seeing her at the all school reunions. So very sorry for your loss. Praying 🙏 for you in the days and weeks ahead. God bless you as you celebrate her life . Sincerely Debra Henderson
Comment Share
Share via:
JF

I pray that the Lord will bless you with comfort and peace in the days ahead. I know Chris has been welcomed to her new life with love and hugs by family who have gone before. I grew up spending much time with Aunt Norma, Uncle Carl and the kids on a succession of farms during summer months. When I traveled to Scottsbluff from Minneapolis a few years ago, Chris helped her feel loved and accepted and Chris made sure Mom hade plenty of diet Coke and an opportunity to eat good food, collect “special rocks” and spend time with family. I enjoyed Chris’s sense of humor and the way she gave of herself, and I appreciated the help she gave me with Family History.

Love to you all,
Jennifer Hartranft Fritzler

Ann Davidson I am a distant cousin of Christine. I remember spending tie at the farm when I brought my nieces to Nebraska. I wish you my deepest sympathies to all of you. Like Jennifer, I know that she was welcomed to her new life by many who had gone before her and I also know that she will be watching all over you. My prayers to you -- Ann Davidson, Logan, Utah
TF

The Morwood and Ellis Families

The Morwood and Ellis Families purchased flowers for the family of Christine Webb. Send Flowers

Posted Feb 10, 2021 at 12:57pm
You will be missed dearly, Aunt Chris. Thank you for all of the wonderful memories. Holding your family in our hearts. 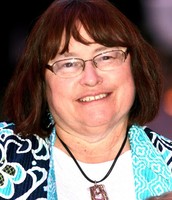